The African spurred tortoise is perhaps one of the most interesting species. Not only do they reside in a continent that is known for its wild animals, the turtle thrives on the edges of one of the most inhospitable places on earth – the Sahara Desert. Other interesting facts about this species are:

The desert landscape can be a hard place for any species to survive. Let alone a turtle that is known as one of the gentlest creatures. The extreme Saharan habitat has equipped the species to survive on sparse ecology like semiarid grasslands, savannas, and thorn shrub lands. Do not be surprised if you find one of them munching on a cactus pad as if it were just another item of food.

The African spurred tortoise deals with the extreme heat in the region by digging burrows in the ground to find areas of high moisture content which remain cool even during the hottest part of the day. Some turtles are known to excavate to around 10 feet below ground with tunnel systems, which allow them to climb back up during the evening.

When it comes to looks, the species is blessed with a regal air that can instantly draw your attention towards it. The large, horned shell, replete with elegant shades of brown, almost looks and feels like an ornate crown. The edges of the shell taper outward in a regal manner. But it’s not all about the shell. 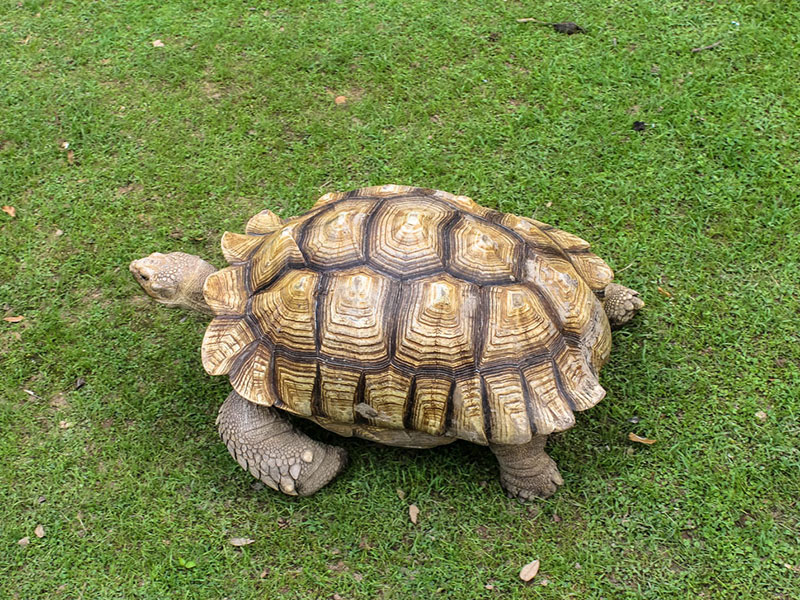 The limbs of the African spurred tortoise have scaly structures that give them a unique visual appeal.

Because of the way the turtle looks and the reputation as one of the most pleasant species, they can be quite an interesting option as pets. That being said, maintaining one of them may not be the easiest thing to do. They require specific conditions and a particular diet for their well-being.

The first thing they need is space. Since they are the largest of the mainland turtles, they would require a spacious enclosure. The other factor that needs close attention to be paid to it is the temperature. The species belong to the Sahara and they require a constant temperature above 16-degree Celsius in their enclosures.

Apart from the space and temperature, careful attention also needs to be paid to the resting area that needs to be made up of grass.